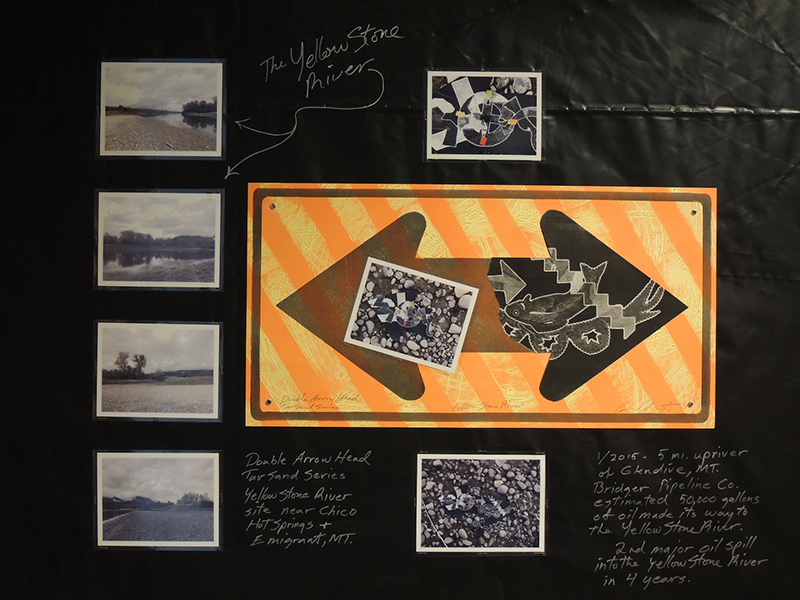 In one series, “Leaving a Legacy,” Ichikawa looks to the 2011 nuclear disaster at Fukushima. The nuclear meltdown moved Ichikawa to examine humanity’s relationship to the materials we create and leave behind. The disaster in the artist’s native Japan led her to consider radioactive material closer to her home in Washington State. Upon learning that the Hanford nuclear site encases nuclear waste into glass in a process called vitrification, Ichikawa was inspired to create glass sculptures with added uranium. These glass orbs are illuminated to produce a hypnotic glow. The magnetic beauty draws in viewers, provoking us to contemplate the uncomfortably close connection we have to nuclear material.

Water joins all of Ichikawa’s work, and the nature of water is explored further in the short film, “Vitrified.” In this poetic film, a character encounters a radioactive glass orb in the forest and carries it to the ocean. A voiceover muses on the connective, destructive and eternal natures of water, which enables life and links everything in the world. The film, sculptures, and images complement each other, and each encourages a closer and more nuanced look at the others. Vitrified encourages viewers to accept and embrace the ironies, contradictions, and interconnections of all elements in life.

Corwin Clairmont’s Tar Sands Project is a commentary on the extreme environmental impact of the mining of tar sand, oil extraction and processing near Ft McMurray, Canada.  His interest in the Alberta Tar Sand site was heightened in 2010 when truckloads of tar sand mining equipment began moving though Montana. The processing of tar sand mining and production creates excessive and much higher than normal amounts of greenhouse gas emissions than other common petroleum production processes. The destruction of the land, water, animal habitat, and fisheries is enormous and irreparable. Clairmont made two trips 2011, and 2014 to the Alberta Tar Sand site located on the largest fresh water inland delta on the continent, and it left a huge impact on him. Struggled to comprehend the sheer size, magnitude and destruction of an area covering 50 square miles of mining, nearly the size of our Salish and Kootenai Reservation, he spent nearly two years processing the experience in the form of a relevant art project and personal statement, taking hundreds of photographs by way of personal transportation, tour bus and a one-hour chartered plane flight over the mining and processing sites.

A primary image used in the first Tar Sand art project came to him in the form of a common road sign symbol indicating a T intersection. Coming to this intersection, you often see a rectangular yellow warning sign with a double-headed black arrow symbol informing you the need to turn either left or right. Clairmont uses this arrow as a metaphor, posing the question of critical choice, and representing the need to make a decision that supports life or destroys life. Concerning global warming, use of land and natural resources, protection of animal habitat and basic human rights issues, it is imperative that we make the right choices now. The arrow points the direction or choice to be made. He also includes the common Gummy Bear candy in his work as a metaphor for the hundreds of black bears that have been displaced or killed as a direct result of the mining operations.

To some cultures, the place we call the underworld or afterlife is a very real place, a world which runs parallel to our own containing secrets and answers regarding the fundamental principles of reality. It is the stories of this place which serve as the foundation of Christian McGirk’s work. Whether by means of drawing, painting, or sculpture, he utilizes a high degree of expressive mark making and layering. It is through the use of line and a variety of media that his images and forms can take on surreal qualities which are inspired by historical accounts of the underworld consisting of tales new and old. Some lines create tension or space and can otherwise contribute to the otherworldly characteristics mentioned in these stories. Every piece Christian makes begins with a precise under drawing, painting, or structure. He uses this as the base for his expressive mark-making and placement of materials in order to truly activate the picture plane or sculptural space. Depending on the piece, he will employ a variety of techniques and materials to reach a desired outcome, including: hand-carved wood, plaster, cast paper, inks, paints, metal, and assorted surface treatments. For Christian, a successful 3D piece must appear as a corporeal translation of a drawing and likewise any drawing must be gestural and structured so that it too may become a physical object.