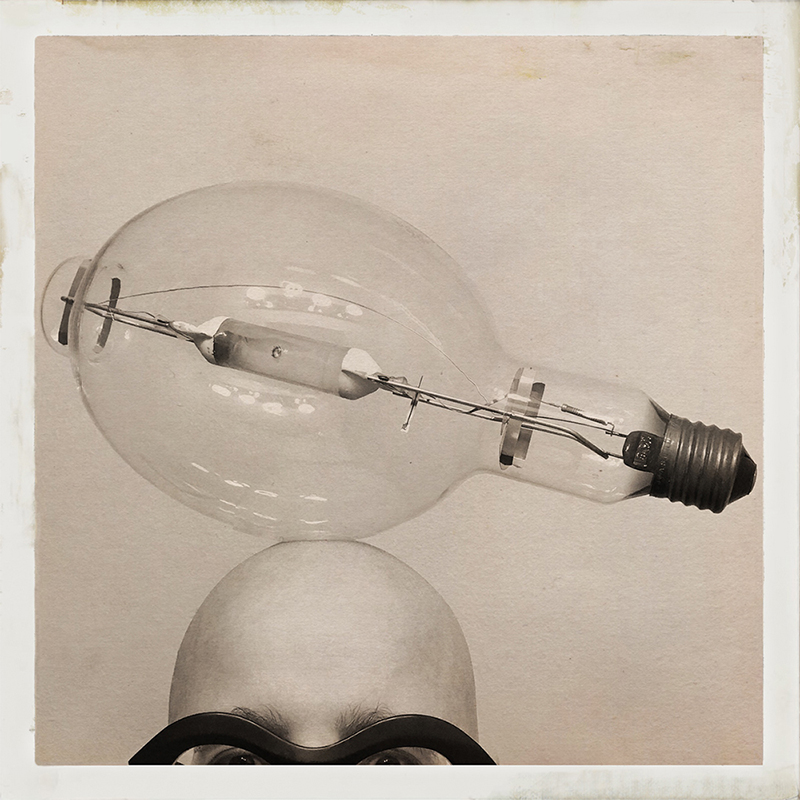 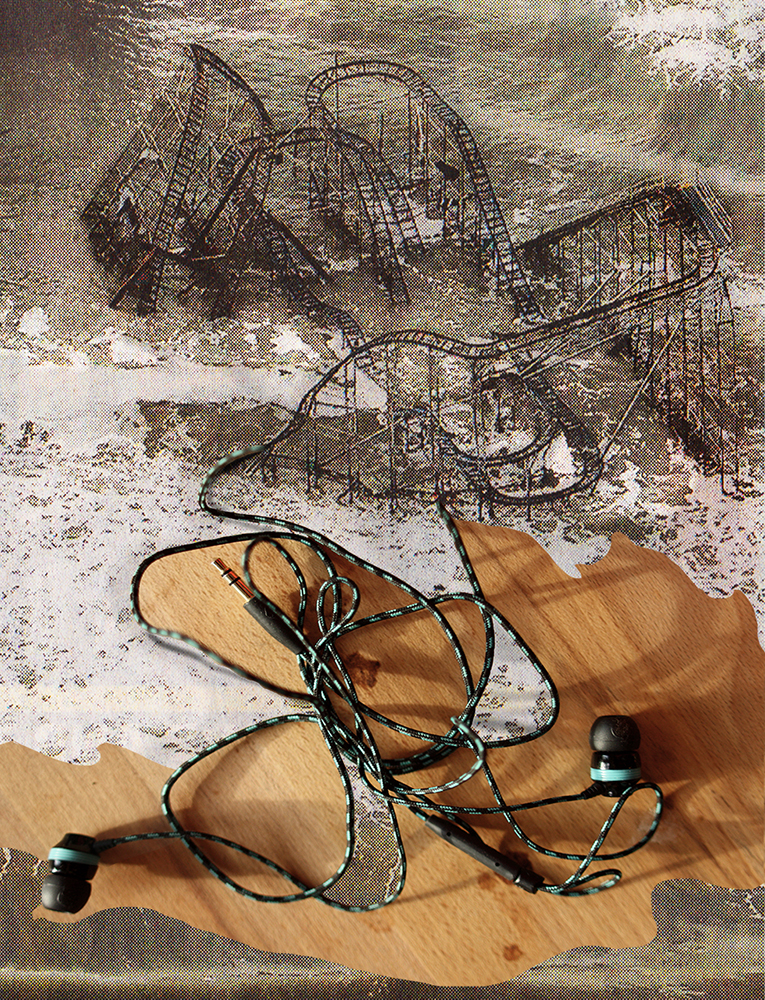 Double Vision is a selection of photographs by five artists from Blue Sky’s 2018 Pacific Northwest Drawers, an annual juried exhibition featuring portfolios by over forty photographers from Alaska, British Columbia, Washington, Oregon, Idaho, and Montana. The work on view by these five selected artists brings aesthetic play to the forefront, yet as the title indicates, each artist is presenting two distinct visions–aesthetic,and conceptual–in their photographs that push and pull at each other to reveal more serious underlying themes that range from the personal to the universal, along with social commentary and astute reflections upon the unique mechanics of communicating through photography.

In her series Head Shots, Susan Bein embraces the fact that she is bald, and uses the dome of her head as a stage for her whimsical still lifes. Her playful, often humorous, compositions underscore the artist’s comfort within her own skin as she flaunts conventional expectations of what a woman’s body “should” look like. Laura Kurtenbach is also concerned with visual representations of women in her series, Femme Noir. To disrupt and draw attention to the objectification and and narratives of victimization in popular media, she places found images and objects in new photographed compositions. Although aesthetically playful, Kurtenbach’s use of light and shadow is reminiscent of the darker undertones found in vintage film noir. Randi Ganulin similarly reflects upon the power of mass media in Paired Disasters. Her compositions combine photographs of clippings from the Los Angeles Times with scenes from her everyday life. In this way, Ganulin highlights visual patterns that link the microcosm with the macrocosm, illustrating the intrinsic link between public and private life, yet the visual tension still present mirrors the perceived, albeit tenuous, separation between the individual and the collective.

This visual tension and disconnect is also evident in Lucas DeShazer’s photographs of murals that depict the settling of the American West. Many of these public artworks paint a celebratory picture of the past that leaves out the genocide of indigenous peoples and the devastation of natural resources and animal habitats that occurred in the process. DeShazer uses his camera to draw attention to this flattening of history, yet it is fascinating that he uses photography to do so, as the camera literally flattens our three-dimensional reality into two dimensions. Jennifer Zwick experiments with this characteristic of the medium in her images from the series An Exercise in Formal Composition. Using a slightly off-balance right triangle rendered in a variety of materials, she intervenes in otherwise straightforward compositions to expose the artist’s hand in the construction of a photograph.

When viewing photographs, we often suspend disbelief, immersing ourselves in the scene or narrative presented to us while ignoring the two-dimensionality of the photograph or the subjectivity of the person behind the camera. Zwick, as well as the four other artists featured in Double Vision, encourage this consideration of how their photographs are made and how materials and process inform meaning, allowing for engagement with their work on multiple levels.

Unseen Lament is a show that is meant to be inclusive of the blind. Finally, art you can touch! These sculptures, while making the art world a little more inclusive, deal with decay in the natural world as well as tying in the artist’s ancestral roots. This hybridity produces interesting images, textures and forms. According to Ontiveros, “My intention is to make tactile sculptures while focusing on surface decoration, texture, form and symbolism. I’ll be focusing on the hybridity of my roots and nature in the form of decay. The cycle of the monarch butterfly is directly tied to my Mexican roots. In the winter the monarchs migrate to warmer regions and end up in Michoacán, México, where my parents migrated from.”
Amanda Ontiveros is a Central Washington University undergraduate student. She was awarded an exhibit at Gallery One based on the quality of her work in the 2018 CWU Art Student Show.

Bursting Forth is a collection of pieces that embody the spirit of Jenna’s art and the reason she creates. At the core of her art is a spontaneity and unplanned harmony that grows like nature and life itself. Through an unrestrained, unplanned creative process she taps into a freedom and wonder similar to that experienced in childhood. Her art is a vehicle for expressing her greatest joys in life–the magic of nature and the cheerful feelings she remembers from girlhood–through use of a bright and happy rainbow of colors, and both natural and whimsical shapes.  It’s her hope that, through her art, she can bring happy and lighthearted feelings to the viewer. Life can sometimes be so full of challenges and ups and downs, something she admittedly can’t control, but she does have control over what she creates at the easel, and so she tries to create bits of joy. This exhibit is similar to the leaves and flowers exploding into life after the winter, and the exuberance of children growing, exploring and dancing to the song of life.