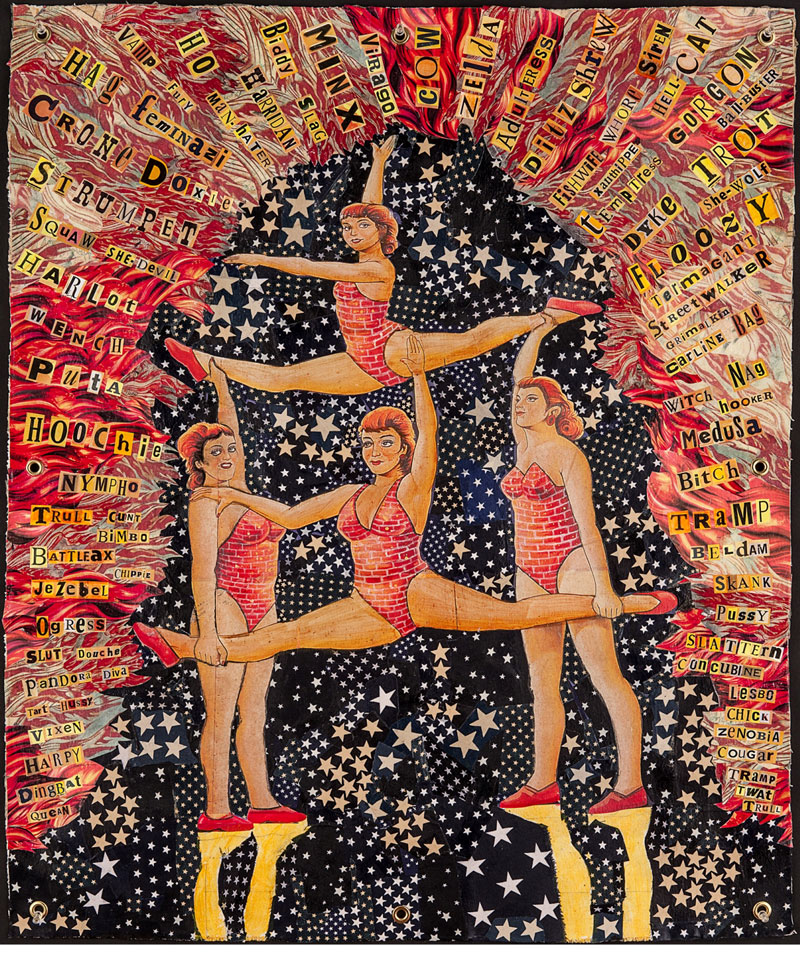 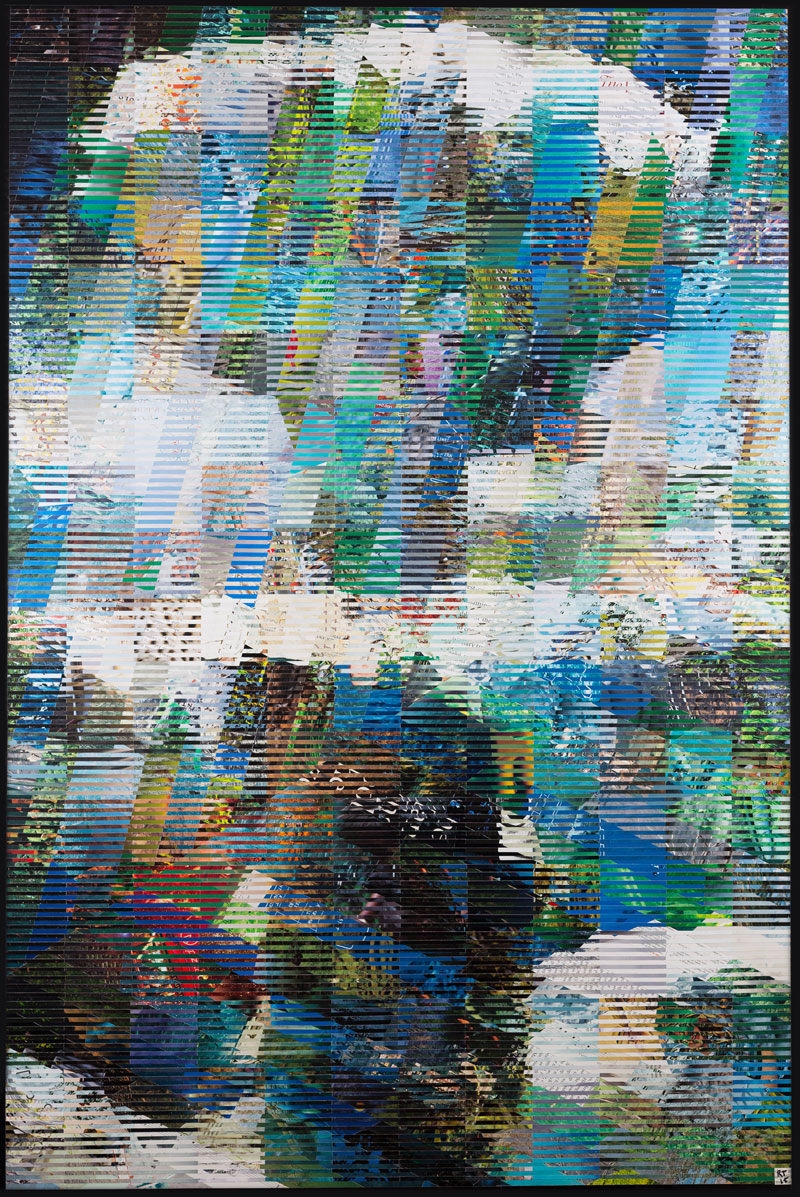 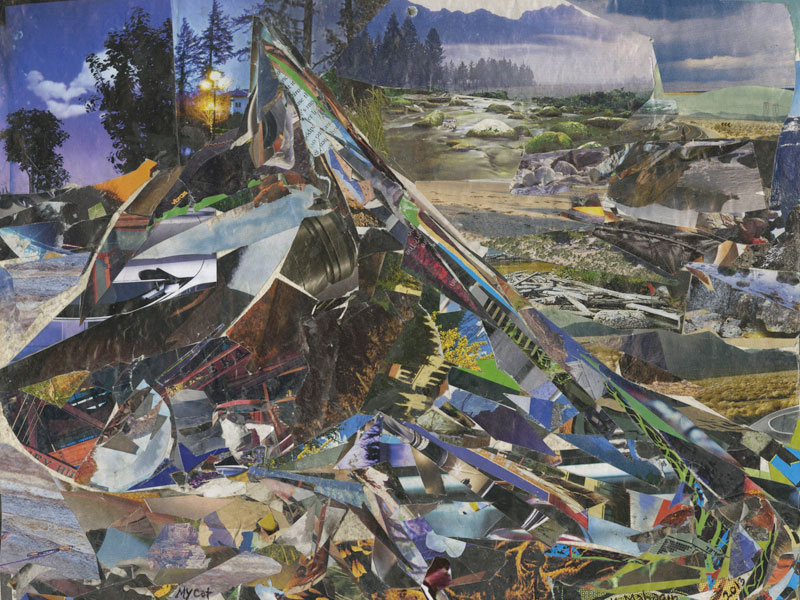 Gallery One’s exhibits open on the First Friday of most months in conjunction with the Ellensburg Art Walk.
Click here for a full walking tour and map.

Cut It Out
Juried by Deborah Faye Lawrence

Congratulations to all the artists selected by our juror! Only 49 pieces were selected for the show from a group of 728 entries.

Art is not a mirror held up to reality, but a hammer with which to shape it. – Bertolt Brecht

Because I am passionate about collage, I was delighted to accept the invitation from Gallery One to act as juror for Cut It Out. From my studio in Seattle, I viewed 728 slides online. Gallery One accommodates only 49 artworks, so my arduous task was to eliminate 678 collages! This was a challenge, because every collage in the parade of imagery was worthy of close examination. Only a detail-obsessed collagist would have the persistence to wade through so many meticulously constructed artworks!

Criteria:
Gallery One gave me permission to “push the envelope.” I set my intention to assemble a dynamite show exemplifying the best of our medium in the year 2016. In honor of the Dadaists and Surrealists who invented collage in the early 20th Century, I looked for simple, succinct compositions, elegant in their understatement and ribald in their refusal to conform. I was especially attracted to arresting juxtapositions of imagery, text, wit and intention. It was easy to find over 300 collages that fit the bill: artworks which abjured prettiness or charm in favor of merits deeper and duskier. I should mention that inadequate photography nulled a number of contenders from exhibition. And the act of reading hundreds of artist statements helped me to parse creative authenticity from casual hobbyism.

As an arts educator I persistently campaign for the therapeutic benefits of collage: it keeps me sane! I want everyone to try it! As a trained artist, and especially as a juror, I feel it is my duty to outwit pervasive scrapbook layouts of hearts, birds and flowers– harmless as they may seem. In the grueling final hours, when 100 worthy collages had to be narrowed to 50, with bleary eyes I enlisted the expert judgement of my architect spouse, Mike Derry, who helped me to recognize inconsistency and redundancy. Eliminating so many fine works of art was an agonizing task!

I want to thank Gallery One for the rare opportunity to look at American collage in 2016. It’s safe to say that each of the collages in the exhibition represents four or five works of comparable quality and integrity. I regret we couldn’t include them all! I want to applaud all contenders who threw in their hats, and congratulate the fourty-nine artists whose work graces the walls of Gallery One.

A native of California, Deborah Faye Lawrence’s didactic and satirical collages have been exhibited in one-person shows in New York, Washington, D.C, Los Angeles, Prague and Seattle, among others. In addition to grants from The Creative Capital Foundation, Pollock Krasner Foundation, Puffin Foundation, and Adolph and Shirley Gottlieb Foundation, she received the 2015 Irving and Yvonne and Twining Humber Award for her 40 years of collage work. Lawrence has lived in Seattle since 1993. She teaches on the Arts Leadership MFA faculty at Seattle University, and also teaches collage to community groups and public school students. Lawrence is the Washington artist who, at Laura Bush’s inadvertent invitation, deliberately created a controversial “impeachment” ornament for the 2008 White House Christmas tree. It secured the artist about five minutes of fame and disrepute. Deborah’s book, “Dee Dee Does Utopia” (Marquand Books, 2008) is available from Distributed Art Books, and in bookstores. Visit the artist’s website: http://www.deedeeworks.com/