The Ties That Bind

GALLERY ONE VISUAL ARTS CENTER announces their fifth national juried exhibition titled The Ties that Bind. Artworks were chosen from across the nation by our juror for inclusion in a month-long exhibition in the main gallery of Gallery One. We are also featuring works by our juror, Joey Velkamp, as part of the exhibition.

Juror:  Joey Veltkamp  makes text-based fabric work and drawings. His work has been shown at Seattle Art Museum, Frye Art Museum, Tacoma Art Museum, Greg Kucera Gallery, SOIL, and other galleries in the Northwest. Joey is currently prepping for his first solo museum exhibition in 2020. He lives in Bremerton, Washington with his husband. 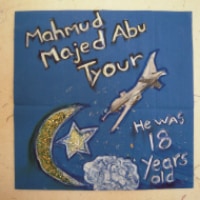 The Drones Quilt Project was created to raise awareness about the illegal and immoral use of weaponized drones by the United States, which are responsible for the deaths of thousands of people, primarily in Pakistan and Afghanistan. Each block of the quilts bears the name of a drone victim and was created by a different individual. The Drones Quilt Project exhibit has been seen by thousands as it has traveled around the country for the the past 18 months, visiting 20 cities.

The idea for a Drones Quilt came from some women in the UK who started the project as a way to memorialize the victims of U.S. combat drones. They believed that there were lots of anti-drone activists in the U.S. who would like to make their own version of a Drones Quilt, and so the idea traveled across the Atlantic. The idea is to collectively create a piece of artwork which connects the names of activists with those killed. The names humanize the victims and point out the connectivity between human beings.